While I have quite a few more posts I should publish, while this afternoon I was blessed to speak to a huge portion of my family, while I have frustrations and a few issues I'd like to whine and complain about, I don't want to focus on those things.

Let me start by saying, this evening, the moon was the very first object that I noticed. It blooms in my sky here with an ethereal glow tonight. It seemed so huge and it was so very bright, that it truly over shown that corner of the atmosphere. The sight broke even the unconscious concentration of my motor skills. For a moment I merely stood there, strangely feeling unaccustomed with such unearthly beauty.

Then I continued to the concrete area that is our designated trash pickup spot. Hahahaha! Such an unglamorous sentence after the previous preening, I know!

But before all that, we, Alma, myself, Josh, and Hayley were invited to dine at the home of one of our Japanese neighbors. The husband showed us around their lovely house, which had a tatami room but was built of course in a more modern, and nowadays western style. There home is built on I believe he said a twentieth of an acre. The tatami room is the room right beside the entry way where the two of them would meet with guests or place futons for visitors to sleep like their children's family of four. There is a type of alcove just to the left of the door that is a display place of sorts though it runs the entire height of the room and is at least half as long. They had a license and a beautiful letter as decoration instead of the usual bonsai or flower arrangement piece, commonly referred to her as ikebana. It is considered a traditional art form here, and who could gain say them, look at this example!

Dinner was delicous, though in all honesty, I couldn't tell you what we all ate there were so many dishes. I do know our main course was chicken and pork served with baked mushroom, green bell peppers, and pumpkin. The meats were cooked in a mixture of soy sauce, herbs, and worstechester sauce! Imagine that! I loved it so much i probably had more than was good for me. 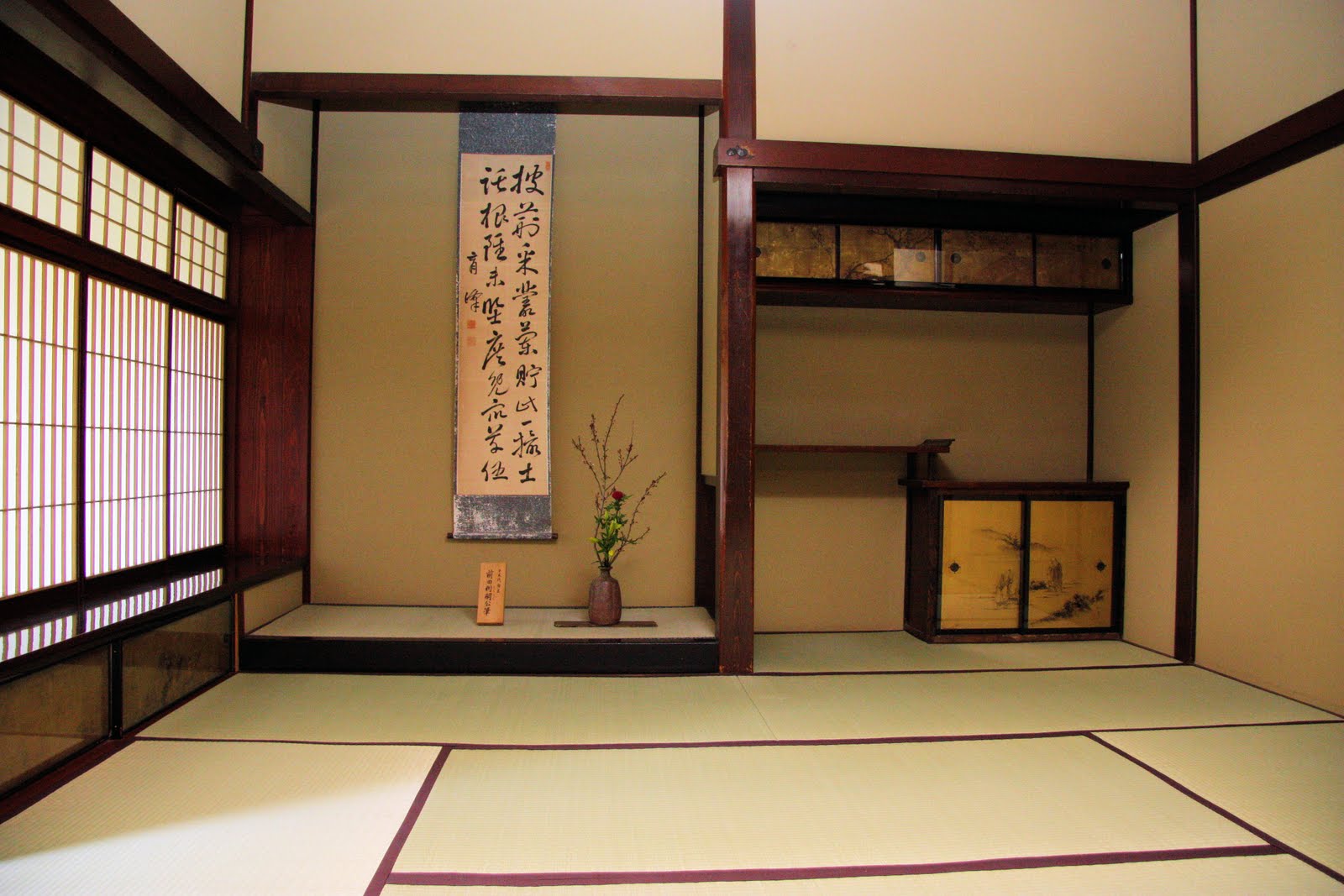 The room looked similar to this actually with the screens and everything, but perhaps not as extravagant. Funnily enough, the part I found the most amusing was how the wife of the family had insisted upon changing the floor plans where her husband's office would have gone. She demanded that she MUST have a walk in closet! It's good to know that us westerners are not the only ones to appreciate closet space! Hahahahaha!

We drank wine throughout the meal and also had cold coffee preprepared and sweetened! The last dish we were served was of course dessert, which was, as usual, my favorite. A peach yogurt pie was presented to us in all its light fluffy goodness. I won't lie, I had TWO pieces! Hahahaha! There was also a dish put out in a brown bowl that is a common accountriment to food here, almonds and small whole dried fish or sardines I believe. It would seems salty, but in truth it's actually very sweet.

While its surprisingly good, those little eyes staring back at me lifelessly were admittedly hard to swallow. But, one does not shy away from the food placed before them. I did pretty good, though I mentally required a nice swig of ice water almost directly after. (I even had another few fingerfuls!)

Aside from all the delicious food, was the wonderful conversation. I might just speak for myself, but I believe we all had a beautiful time. We talked about books, states, countries, cult movies, scifi, science, politics, religion, gender issues, you name it, we probably covered it. While i don't think we will ever agree on some subjects, it was lovely to have a conversation with two adults whom I could fluently communicate with and more than that, laugh with. It was a blessing and I am so glad Hayley allowed us to come along to enjoy it with her.