Yesterday, I went to my first assignment as an ALT.

I would like to write that, but in truth I've been off for a little over a week and my last assignment was Tuesday the week before. -guilty grin- the title of this post remains unchanged though.

While many of the students I have met thus far are aggressively into English, many of them in English clubs or at least persistent in their studies of the language on their own, I have met quite a few students who were not a part of the Speech Contest.

The Speech Contest is a pretty bug deal here. It runs the same way a debate contest would, regenials, district, ect. The kids study all summer long and then compete before westerners from somewhere else in Japan.

My first assignment was to help students with pronunciation. I listened to them, I helped write words for them phonetically, and marked places where our voices naturally lilt. you would be very surprised if you took a moment to really listen to the way you say a sentence. For instance:

“Sugar? I thought it was poison!”

The first word must be separated, su-ger, and while the “su” is said at a normal low tone, the “gar” must lilt up in order to inform your listener that this word is actually a question meant to convey surprise and even alarm.

The second sentence must be divided naturally into pauses so that the student can get use to saying it as a whole. I would write something like this on the page:

Then I would phonetically sound out words on their paper if they continuously struggled with them.

Then I would indicate in a sentence what words should be stressed, which help bring emotion to the speech the student is attempting to memorize. This is very difficult for some kids because the Japanese language tends toward very monotone renderings. I know this because I'm trying to learn and I always get smacked by Alma when I lilt. Eh heh.

For those of you thinking, “but in anime,” please realize that anime is sort of like a Japanese dialect all it's own. It would be the equivalent of giving an alien Jersey Show seasons and telling them that this is the way we all talk, learn from this. Scary thought right? Hahahaha!

So, back to my lesson, what to stress. I would underline:

“Sugar? I thought it was poison!“

Now, imagine paragraphs of this, and attempt to explain it all to a student who understands English pretty well, but is still a young kid. Many gestures and hilarious facial expressions later, my students do come away sounding better. Then they come back a few days later saying it the way their Japanese English teachers say it and this it is wrong again.

Words like brown, the, this, really any “th”, “v”, “b”, or “r” sounds get them. They try so hard though that you can't help but to root for them. I hope many students place in our area, even better, I hope at least one of my students do!

One other thing they have us do is record these speeches. You read very slowly, one or two words at a time, and then again at a regular speed. This way, the students can hear us all the time and can practice as much as they wish.

Sometimes we correct the grammar of speeches, make the speeches a little simpler, or shorten them. This was one of my favorite things to do, because it really made me feel like I was using my degree even if it was in an infinitesimal way.

Since I don't have any pictures of those kids yet, here is a VERY bad picture of some Takatsu students who I will teach come the end of August I believe. 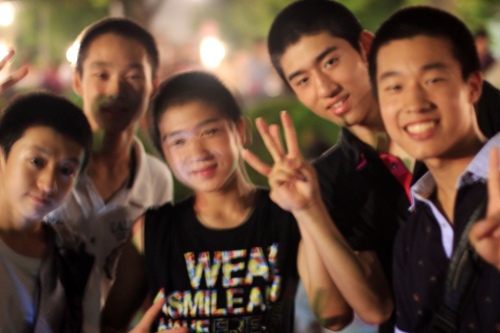 6 thoughts on “Love at First Sight”