After a six hour rest which felt half that time, we started out again for the top at 1:30am.

One of the most beautiful sights met me as I moved around in the chill. (It grew colder the higher you climbed.) Because we were moving up the mountain in the darkness, everyone had LED headlamps on. Miles beneath me and miles above me, floated little blue wisps. Hundreds of pilgrims crept in the cold of night toward an unseen summit in the supposedly near distance.

To me, it seemed so much to mirror my faith. Light enough only to see just before me, but being with others lit your way so much more clearly. Making for a goal clouded by so many things. The way narrow and difficult. But somehow you know if you just keep going forward, even if you slide back a bit, you’ll see something worth all the hardship of getting there. And in the end, the journey itself is somehow worth it.

That night must have been one of the most beautiful nights to have climbed Mount Fuji. I write this because while we climbed we could see the Perseid Meteor Shower. I spotted three ‘shooting stars’ as I lay in exhaustion among and over the rubbled remains of rock slides. (When I finally showered I had rocks in my underwear!)

We stopped frequently as we worked up the last stretch because the air kept thinning and you couldn’t breath as easily. Our guide would tell us to turn off our headlamps and just look up while we rested.

I’ve never seen so many stars nor had such a perfect view for a meteor shower. I could see the lighter band of the Milky Way in the sky it was such a clear night. Even though, strangely enough, in the distance almost level with us the clouds sometimes flashed with lightening.

Those clouds never divulged their rain which was lucky because I did not have the proper gear for that.

I felt so tired but so blessed to have somehow chosen the perfect way of optimizing my trek up Fuji-san. God knows me so much better than I ever stop to consider He does. He gives awfully good gifts to his children.

At the top, I was frozen straight through. I ended up so cold I literally could not feel my toes. The wind was wickedly strong and I took refuge with David in one of the four ‘restaurants’ crowded along the way to the shrine.

Neither he nor I were appropriately dressed for the weather at 3,776 meters. We ordered miso soup in an attempt to warm ourselves and await the sunrise.

David and I awaiting the warmth for our bones

I have decided I am partial to sunsets, but the sunrise from Mount Fuji’s summit was more of a badge of courage, a stamp of honor.

I left David huddled and waiting for his soup to find the place where I was to receive my final stamp on my Fuji staff. Directed to the shrine at the end of the way, I found a nice spot to watch the sun struggle through the clouds, just like I had thirty minutes ago. (She’s such a drama queen though. I didn’t have to have EVERYBODY watching. In fact, I was actually surprised when they said we were at the top! Hahahaha!)

I was about two rows back in the end but I’m tall so it wasn’t a big deal as you’ve been able to see from my pictures. When I was satisfied with the sun’s job, I turned around and sumimasen-ed -excused- my way through a group of people into the shrine.

There, the very second person after the sunrise, I received a brochure, a good luck wooden charm, and the final “Fuji Top” stamp. 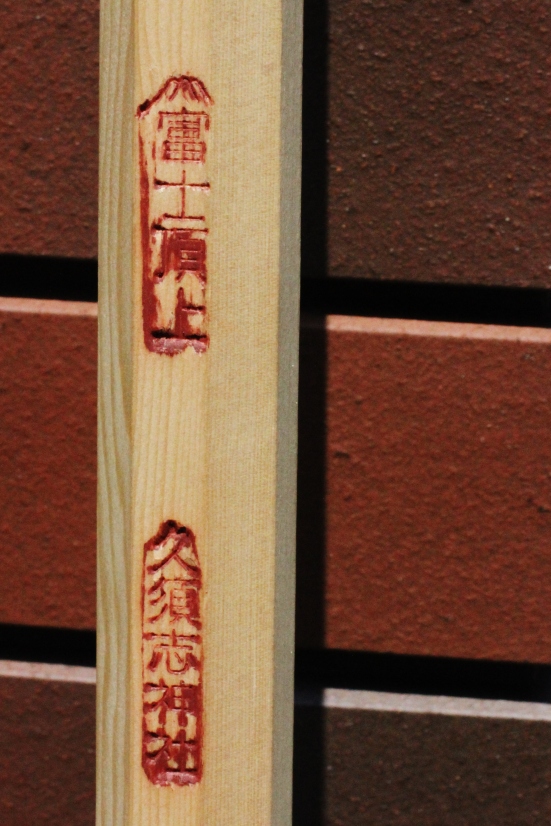 Stamps from the shrine at the summit.

I remember I smiled so hugely at the surprisingly young priests working at the shrine front. (I assume that they are priests though. They wore traditional black and white hakama which is the male version of a kimono in a way.) I thanked him in English my mind so a-whirl with making it to the top when I wasn’t even sure I could.

Like this…Okay, they had a white undergarment on…or did they? ~_^

That’s all I could think, over and over.