Which is a festival. This being my second one, it is different from the first because it focuses more on eating, drinking, and fireworks. Plus it’s HUGE incomparison. The first was more about dancing, drums, and carrying the mikoshi. 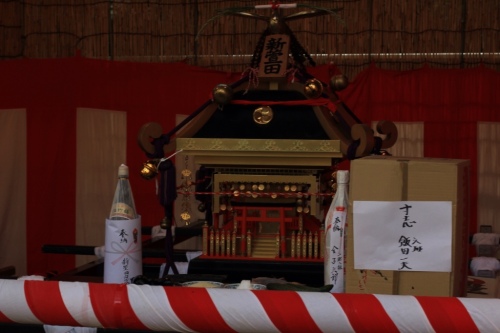 Josh, Angela, and Hayley wore yukata during the day. We walked to the festival area, which was at a large school park as well as up and down the river. People had been scurrying around getting prepaired for this event since days before. 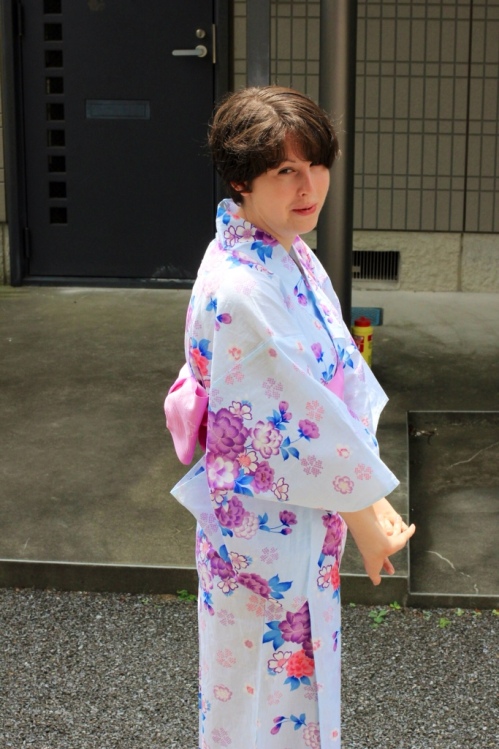 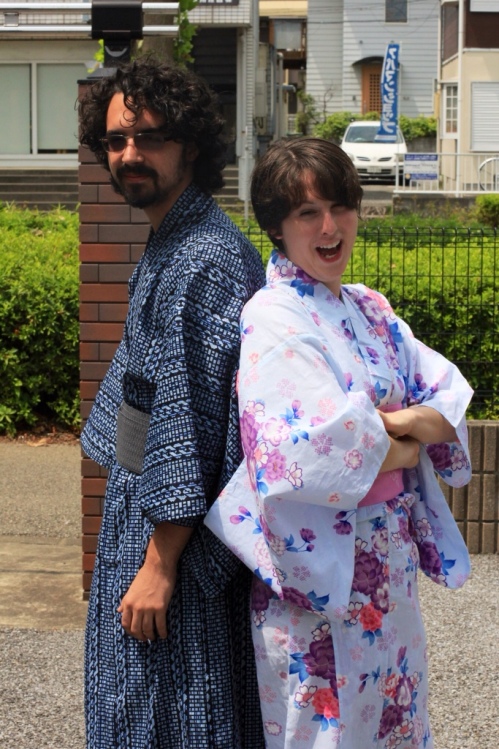 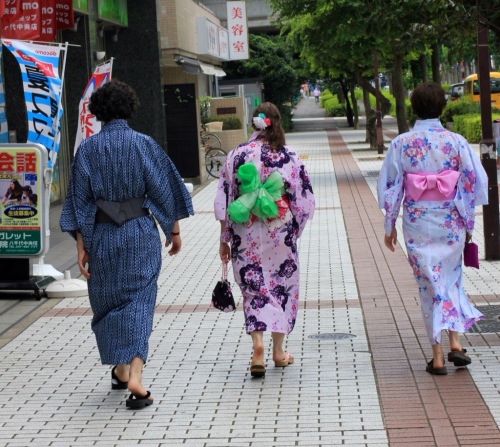 Yukatas look beautiful from behind as well

Once the four of us got there we walked around, ate, and listened as the bands performed sound checks for their concerts later that day. There were stalls slowly but surely appearing everywhere, bight and colorful, stocked to the boards with ingredients, toys, and even some faux guns. If it was Texas I’m sure the guns would have been real. 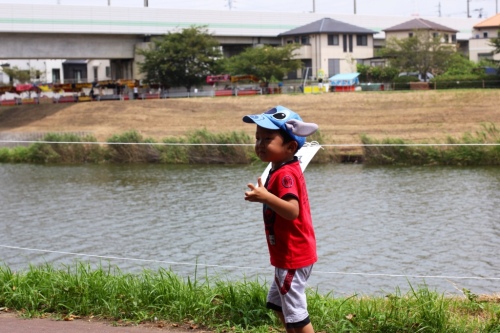 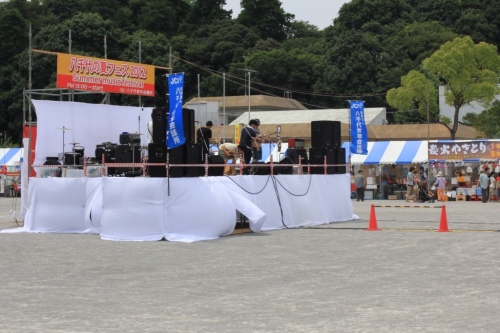 Kids and families were everywhere doing exactly what we were. It was hot and sticky, and the cicadas were screaming just like they are now outside my window, but no one seemed to notice the heat much, there was too much excitement in the air to pay attention to the temperature. 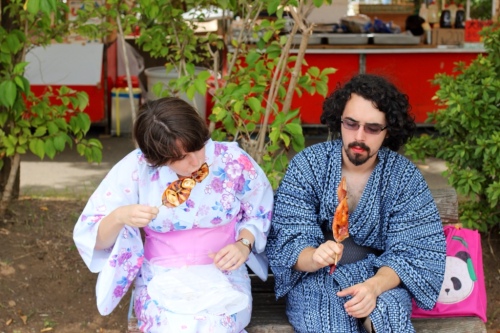 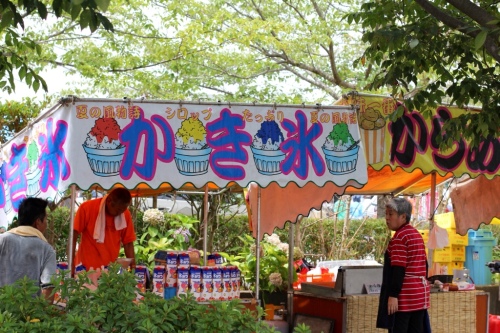 We headed home as rain threatened in dark low patches of clouds here and there. We said goodbye to Josh as Hayley took him to the airport. His humourus and philosophical character will be missed around here. 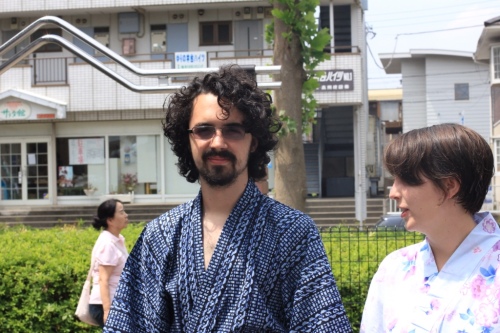 Thunder rumbled around in the sky all late afternoon, but it never rained. Slowly, as the sun fell deeper and deeper in the sky, the thunder trickled away. At about 6:30, after convincing Jenny to come with us, Alma, Hayley, Angela, and I started out toward the festival again. 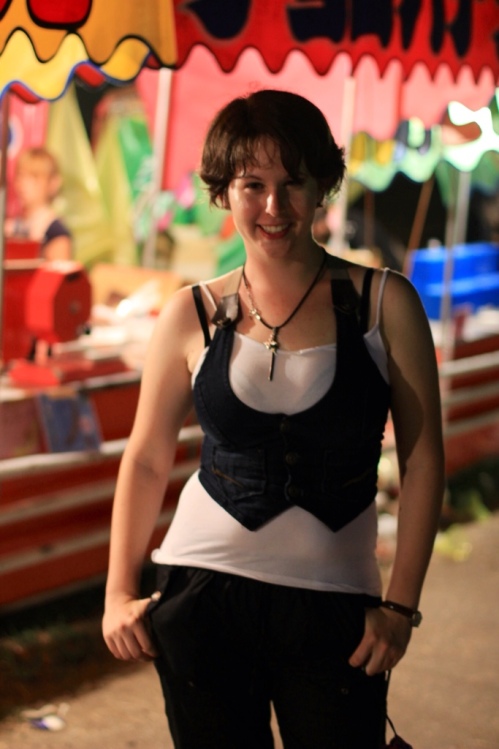 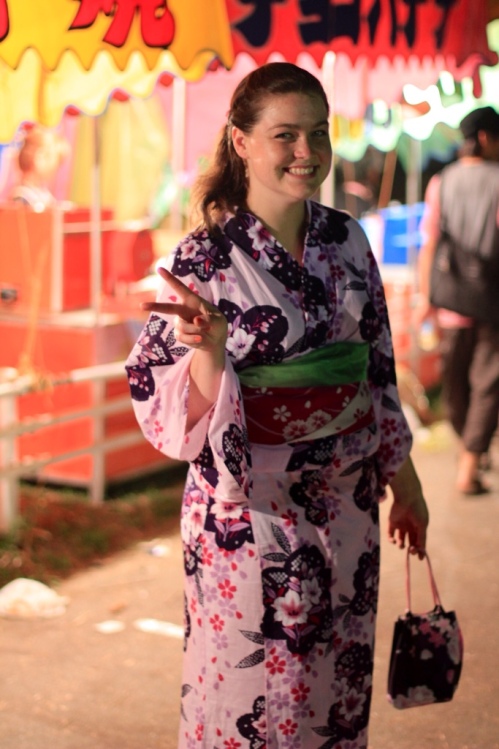 Before we had gone two blocks, we ran into our first festival booth! The 7-11 nearly next door had set out some food to sell. A little farther two girls were selling beer outside their restaurant. A little farther pot stickers and so on! There must have been five or six times the normal amount of people on the street. Everyone was already having so much fun that the thunder must have been forcibly replaced by laughter. 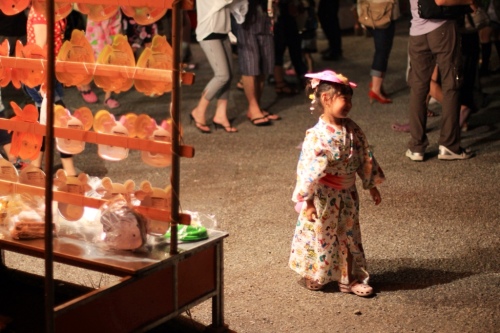 She had the sweetest smile 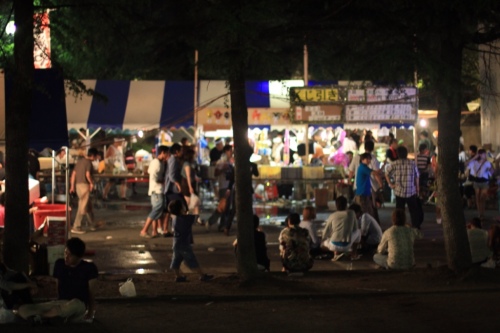 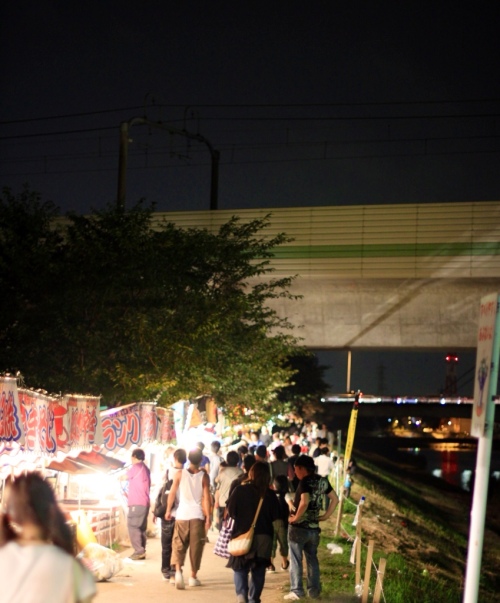 Just beside the Shinkawa River

We somehow kept from being distracted up until the scent of cinnamon filtered past all the others and claimed our undivided attention. The booth was run by three or four roundly cheerful guys who decided to practice their English when we stopped to buy some food. We happily discovered that the warm and delightful smell rose from churros! Apparently Japanese people love them! 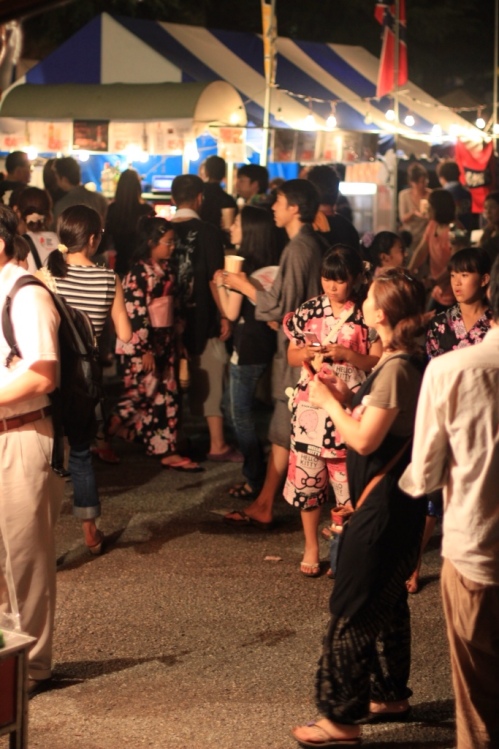 Jinbei! I want a set. Started out as old man pajamas. Lol 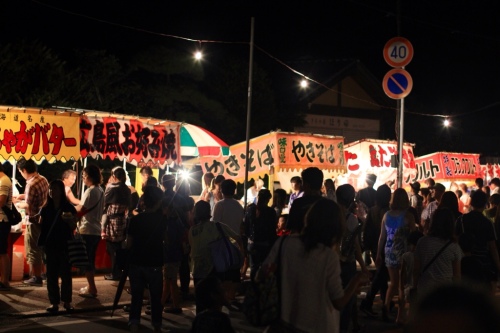 Suddenly, a loud crash pierced through all the cheerful chatter around us. A hollow boom tht echoed through the bones it was so close. The closed road we were occupying dropped into utter silence for quite literally a moment. Cheering and clapping irrupted from everyone even before the rumbles of the bright explosives had died away. You should have seen me spin around smashing my hands together with a fool’s grin splitting my face. My eyes must have been huge as they took in the burst of sparkles falling through the dark sky. 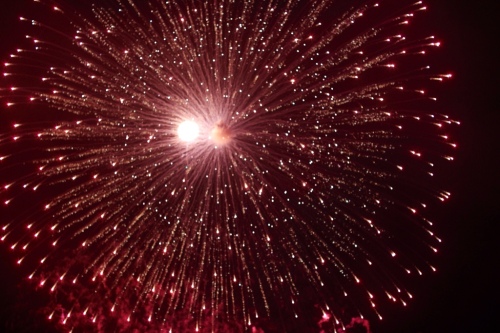 One of my favorite catches 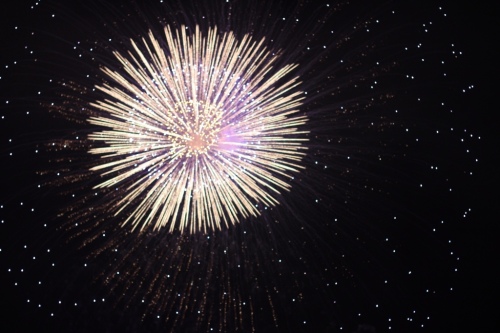 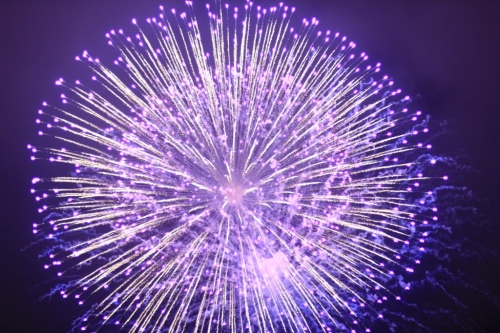 Fireworks! The nearly hour and a half long show was beginning! 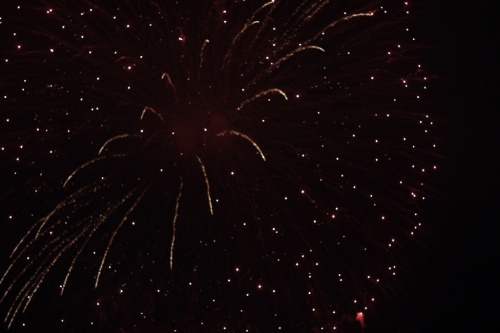 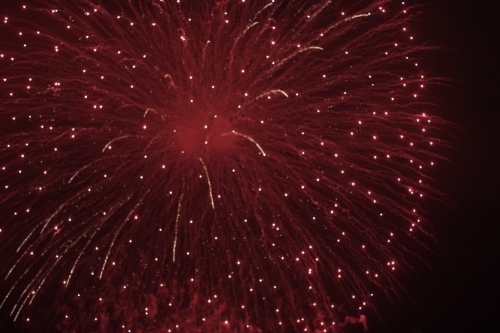 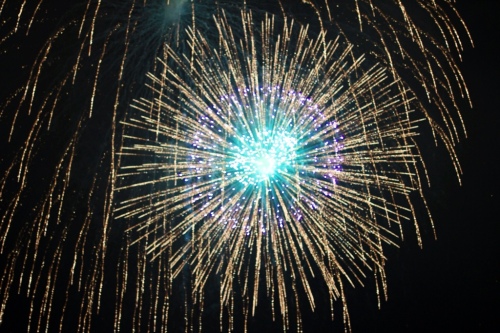 Jenny was just as excited as I was! In fact all the girls were pretty hyped. We thanks the guy who laughed as we ran off waving with the steadily streaming crowd. We all had a purposeful direction now: a view. 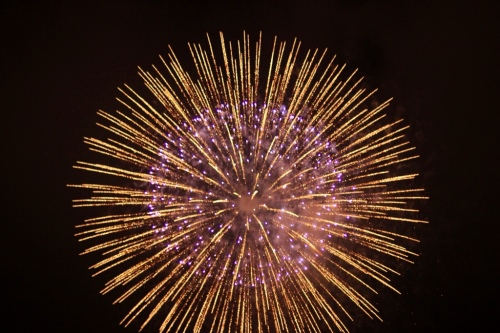 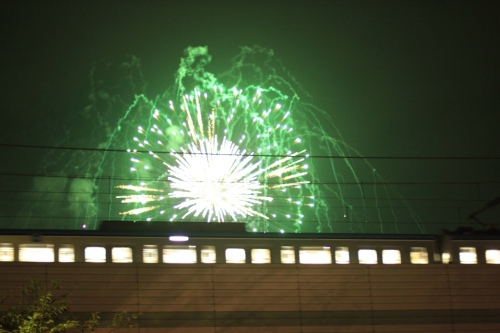 The train was right above us 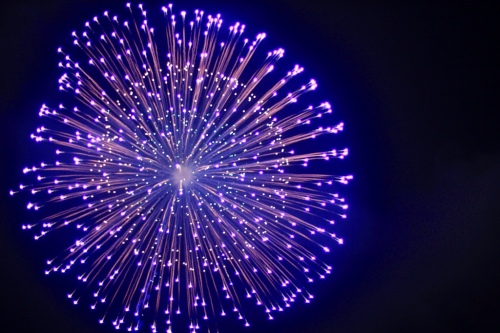 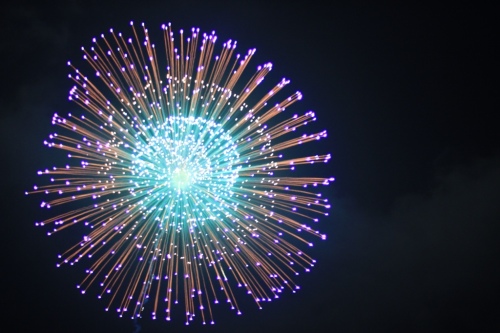 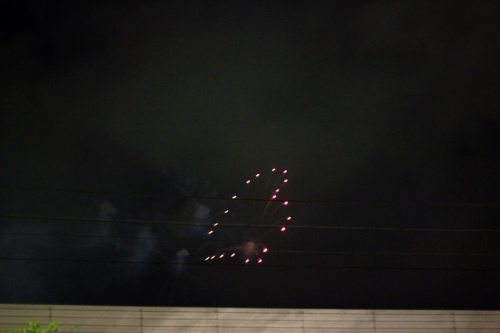 It’s a heart! They did smilies and butterflies and planets too!

We changed places one too many times, splitting up for food and loosing Alma, but we still had a lot of fun. I met some of my future students, ate dumplings, choco bananas, fried chicken, and drank some beer. We took pictures and over all laughed more than I had since karaoke. It’s so much fun when we all get together! 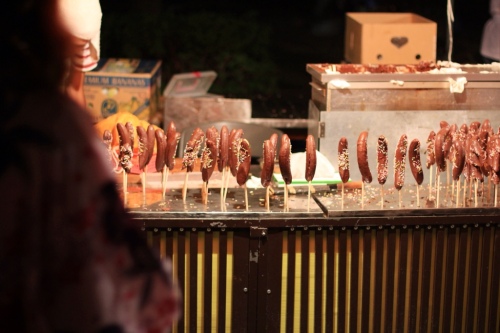 PDA became more prevalent in direct correlation to the rise of beer cans in the trash can. Japanese people are polite to their country even when drunk.

Aside from the fireworks, my favorite view must have been Shinkawa River. All the colors reflected so beautifully in its dark quivering. 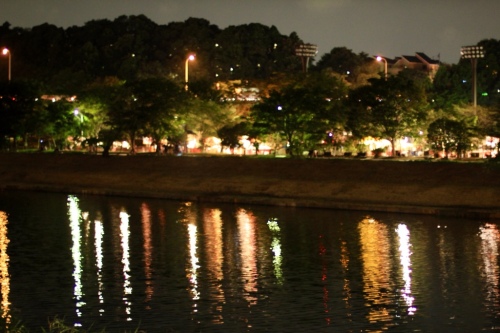